The pandemic has reminded us of the importance of connecting with nature: the world immediately outside our home has become indispensable for both our physical and mental health.

More broadly we are all beginning to realise that the confirmed role of our species in the dramatic collapse of biodiversity and in the unfolding climate crisis has roots in our poor relationship with nature: a relationship that has become estranged, exploitative and instrumental. To repair this disconnect we need to surrender the Enlightenment image of humankind standing outside nature and recognise that we are truly immersed in the world.

Faced with urgency to adapt and respond to the climate emergency, prospective and energetic ideas are required to address the fundamental question: ‘how should we live?’.

Backnang is on the eastern edge of the Württembergisch Unterland region, on the River Murr – a tributary of the Neckar. The river once enabled and powered a series of industries to develop on the western edge of the town around milling – wool, cloth and leather – and later shaped the location of the Kaelble engine works and other large factories. The town grew rapidly in the post-war period, primarily around the telecommunications industry, which forms a precipice of buildings around a meander of the river.

The success of the town mirrors the river flowing through it – the river plain is either flooded with productive activity, or virtually cleared for less purposeful uses. We are confident that 2050 will bring a period of productive ‘flood‘, where once again the river plain will be brimming full, connecting Backnang with its hinterland.

SPRING: Start with The River – This establishing shot captures the initial moves to create Backnang West

As the first task we propose the restoration of the river, drawing the richer ecology that lies beyond the town into the centre of the development. The new urban form is part of the river’s valley bottom field system: we propose to intensify interaction with the Murr.

The river becomes the central connective shared landscape, with a continuous quayside for walking and cycling. This provides a link into the old town centre and re-routes the Stromberg-Murrtal Weg through Backnang West. The river reconnects the town of Backnang with the productive landscapes of the Backnanger Bucht.

The river is also central to the energy strategy, enabling the creation of clusters which harvest energy from the river - both in terms of kinetic energy and heat. Biodiversity is also intensified through an expansion of the river margins: productive landscapes of the future are established right in the heart of the town.

Each bridge is accompanied by a tower that allows full accessibility and also houses spaces for biodiversity (bat roosts, nesting boxes for birds).

Mobility Hubs: Two multi-storey Mobility Hubs are established, which in the short term allow the intensification of car parking in order to free land parcels for development. Over time, as other forms of mobility are taken up and car traffic is reduced, they can be converted to accept other uses. Considerate space planning means that these spaces can be transformed to provide different environmental qualities with minimal intervention. The more southerly mobility hub incorporates community power infrastructure as well as spaces for sport.

Production: An on-site production facility is established to manufacture precision timber components to build the town. 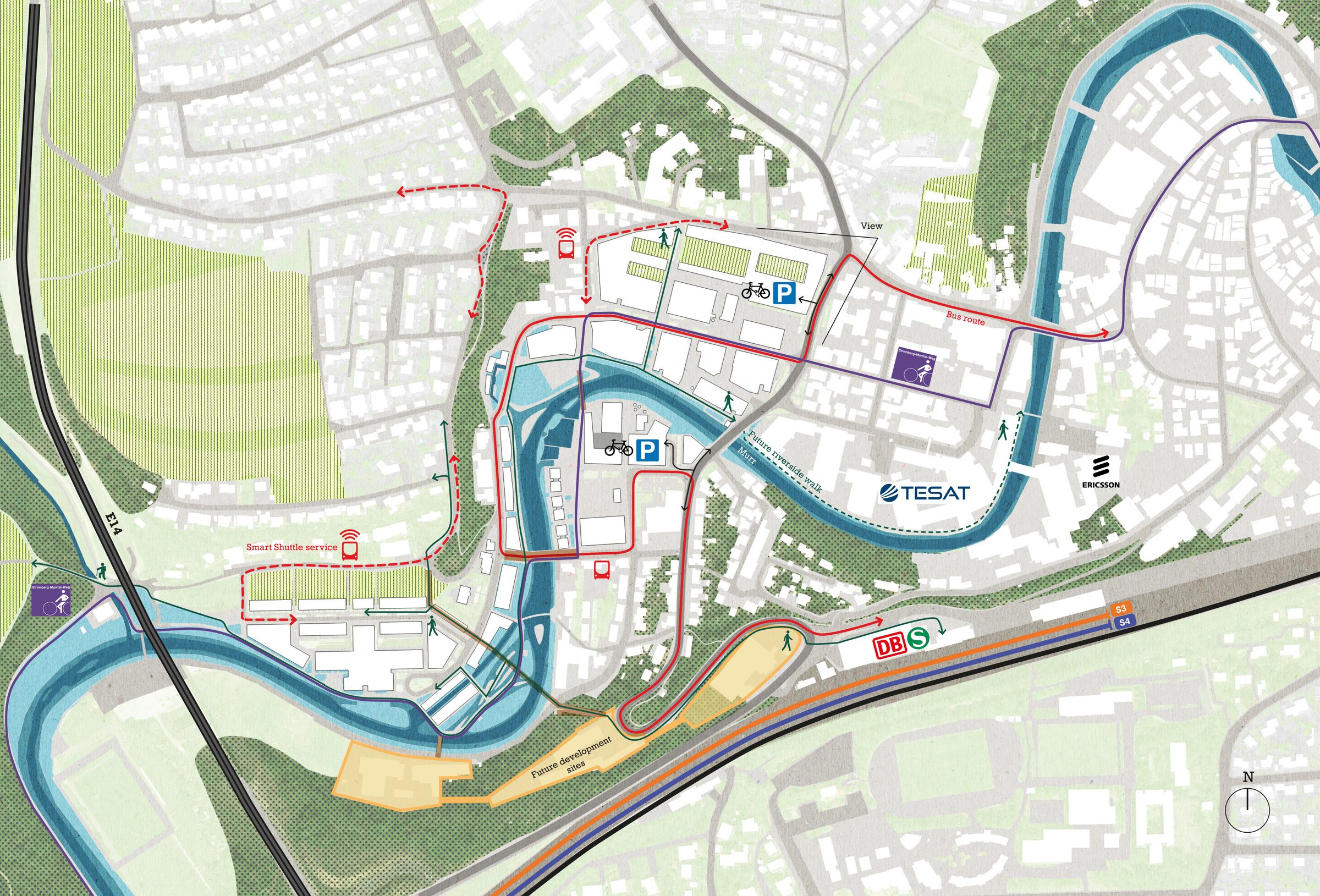 SUMMER: Urban Character – View of the river basin and the sports tower from the public balcony of the “boulder building”

Our approach seeks to amplify and celebrate the hybridities and contrasting qualities of the rural and the urban, drawing on the perception that Backnang has always had a strong sense of its urbanity - as evidenced by the stature of both its public and domestic buildings, and the scale of the factories along the Murr.

To counter a taste for the suburban goodlife, Backnang needs to convince that life in the town, with its close hybridisation of living and working, can offer a more stimulating, equitable and beautiful environment. The value of the collective is celebrated, while the security of the domestic space is also prized.

This view is from the first floor public terrace of the Boulder building - a common civic facility with public foyer, meeting rooms and an auditorium as well as other social spaces. The covered bridge on the left connects the Juve with the river pools, sports facilities and the market.

New bathing pools on this bend in the Murr create a year-round space for play and relaxation and allow the town to reconnect with the river as a rich, living environment.

Construction is well underway to create a new riverside quay. The materials strategy can be seen clearly here. Two domestic typologies —explored more fully on Board 4 — have been developed that use precision-engineered timber construction in innovative ways, drawing on local materials, finished in a factory on site.

The strategy combines the active approach of passivhaus with passive design: making the best use of natural factors in order to minimise energy use in the residential spaces. More relaxed environmental conditions enhance the wellbeing of occupants and offer more direct connection with a variety of outside spaces: from the flowerpot to the fields. 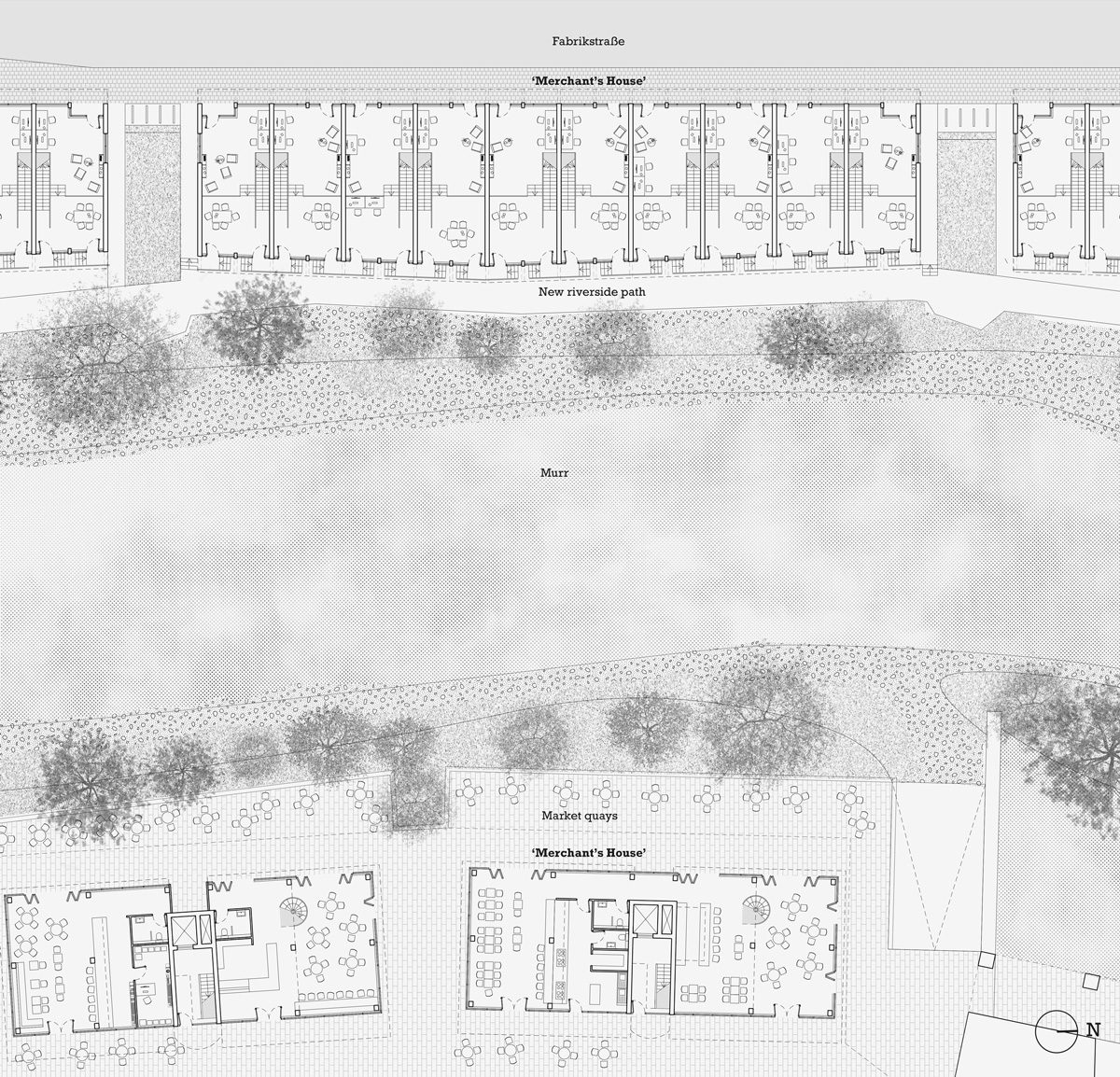 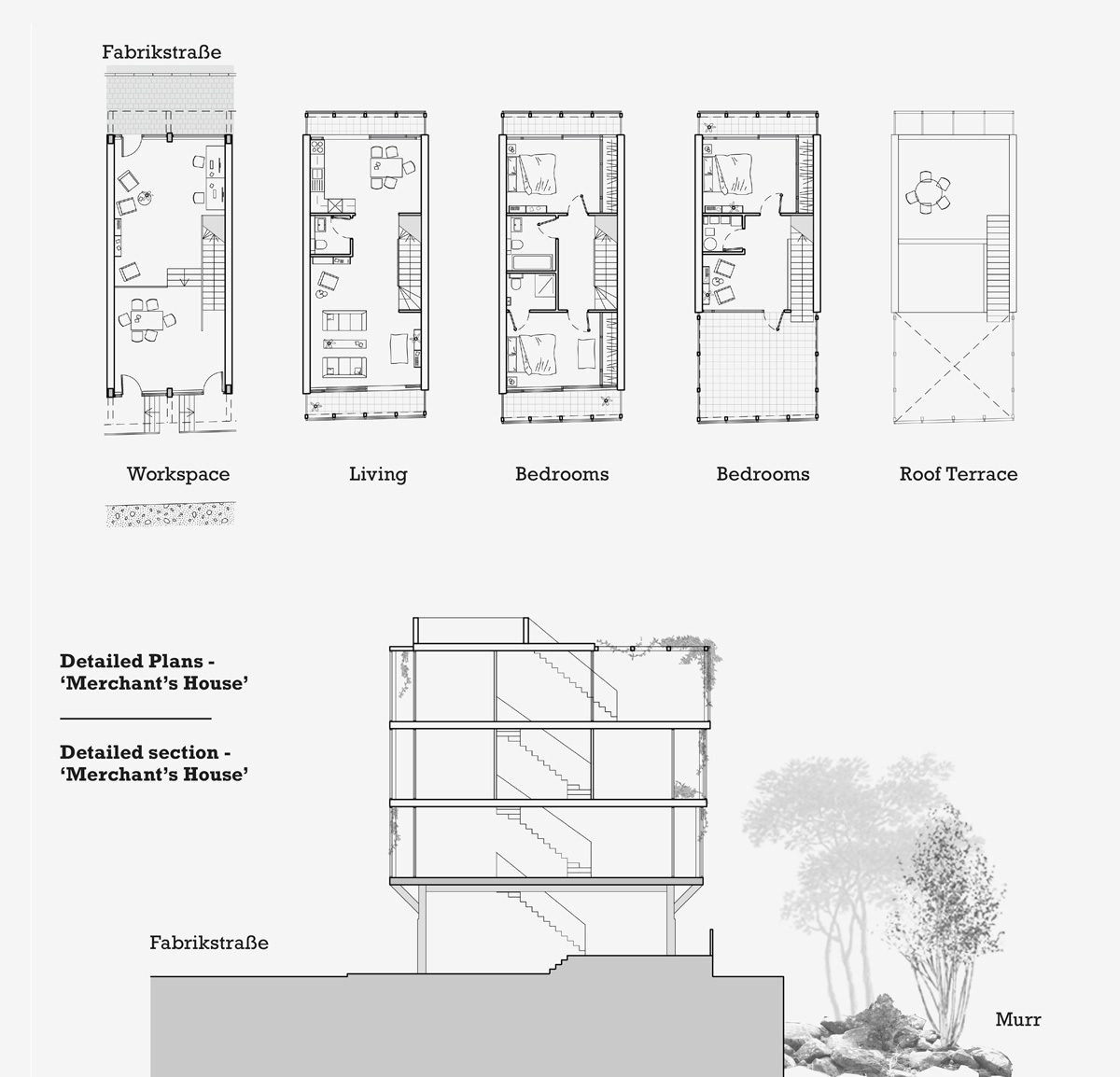 The Two Dwelling typologies developed for Backnang West are explored on this board. Both dwelling types speculate on the future of work and offer a greater connection with the process of making and production as a bridge between the virtual and the real world, founded on the entrepreneurial traditions of Backnang’s vernacular architecture.

The riverside ‘merchant houses’ (viewed on the ‘Summer’ Board) take inspiration from Backnang’s ancient tanneries and mills to create an occupied river edge. As with the mill structures, they have a solid base – more public and open to commerce – and a fine engineered timber superstructure, infilled with rammed earth. The lower zones more vulnerable to flooding are constructed using a low-cement concrete using rubble reclaimed from demolition on the site – part of the strategy for a circular economy. 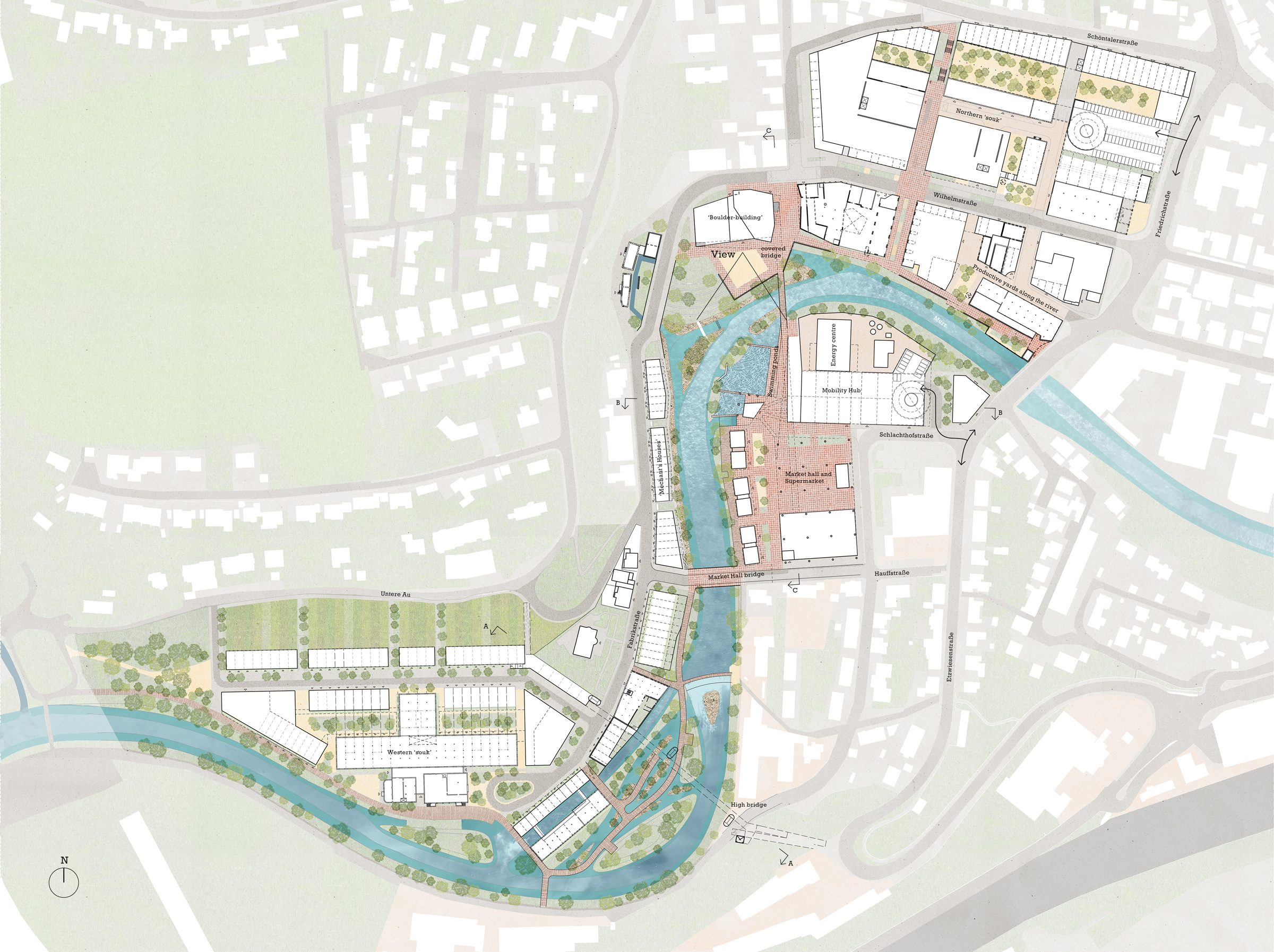 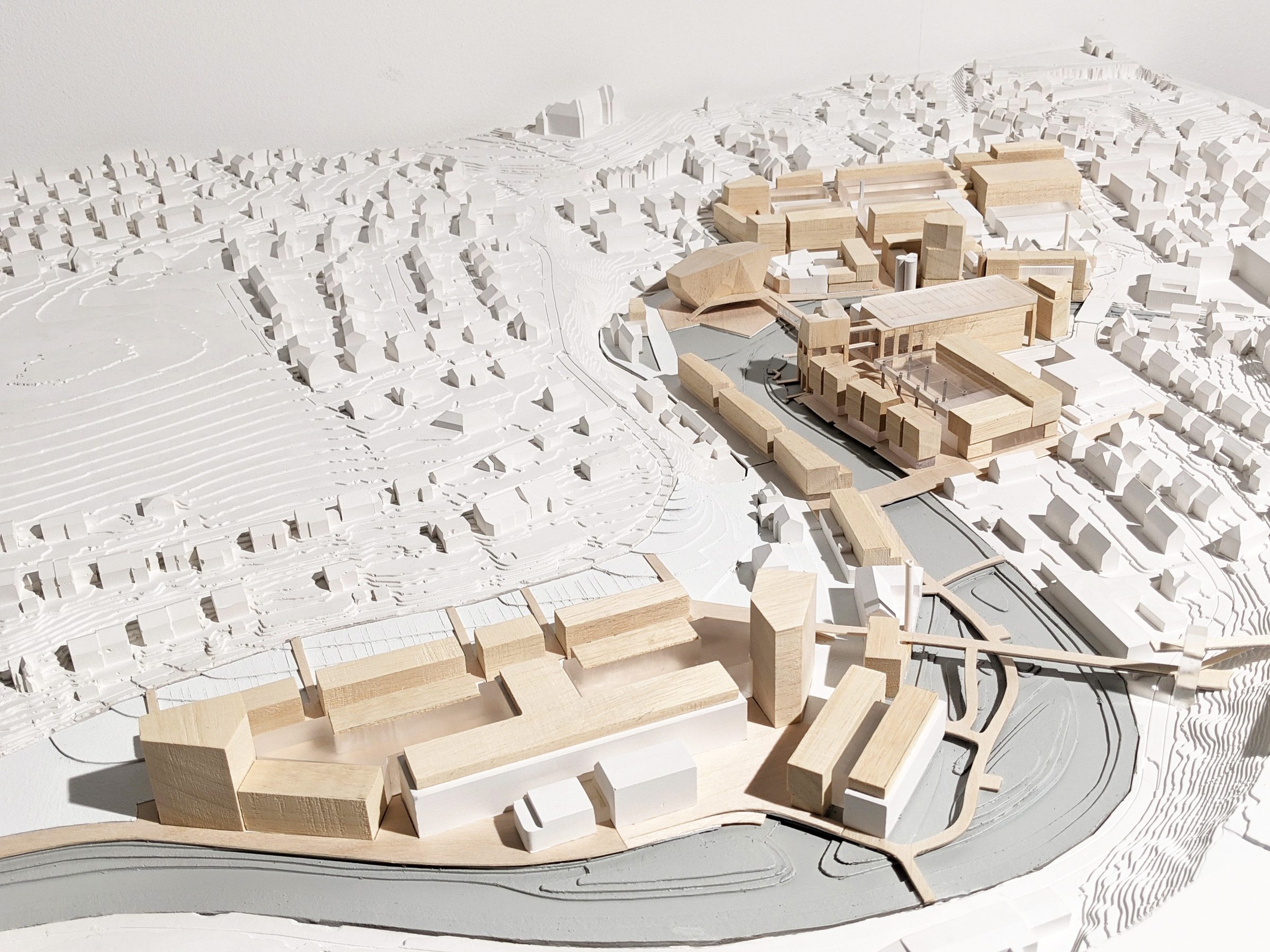 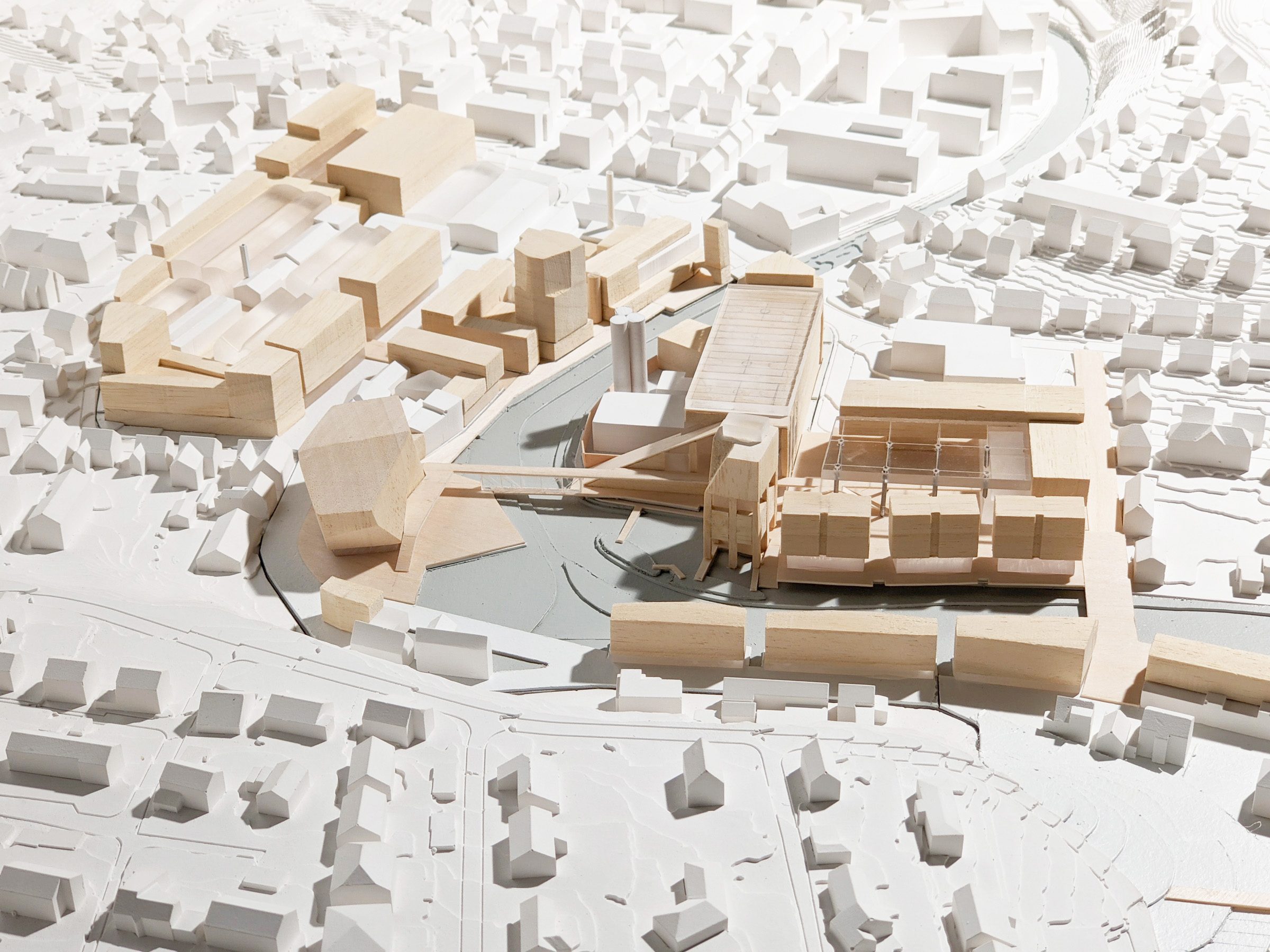 AUTUMN: A Swabian cornucopia – View from the market and the market quays to the north

A few years into the development of Backnang West, this view captures the market in full autumnal glory. This space is the convivial heart of the quarter, incorporating the supermarket as well as restaurants and bars, growing spaces and market stalls that run beneath the merchant houses to the market quay on the river. The mix of cultural production and the output of the different workspaces are represented in this space, encouraging serendipity and exchange.

With better connectivity and more people living locally, there are fewer cars and the mobility building has begin to be converted to incorporate other uses. 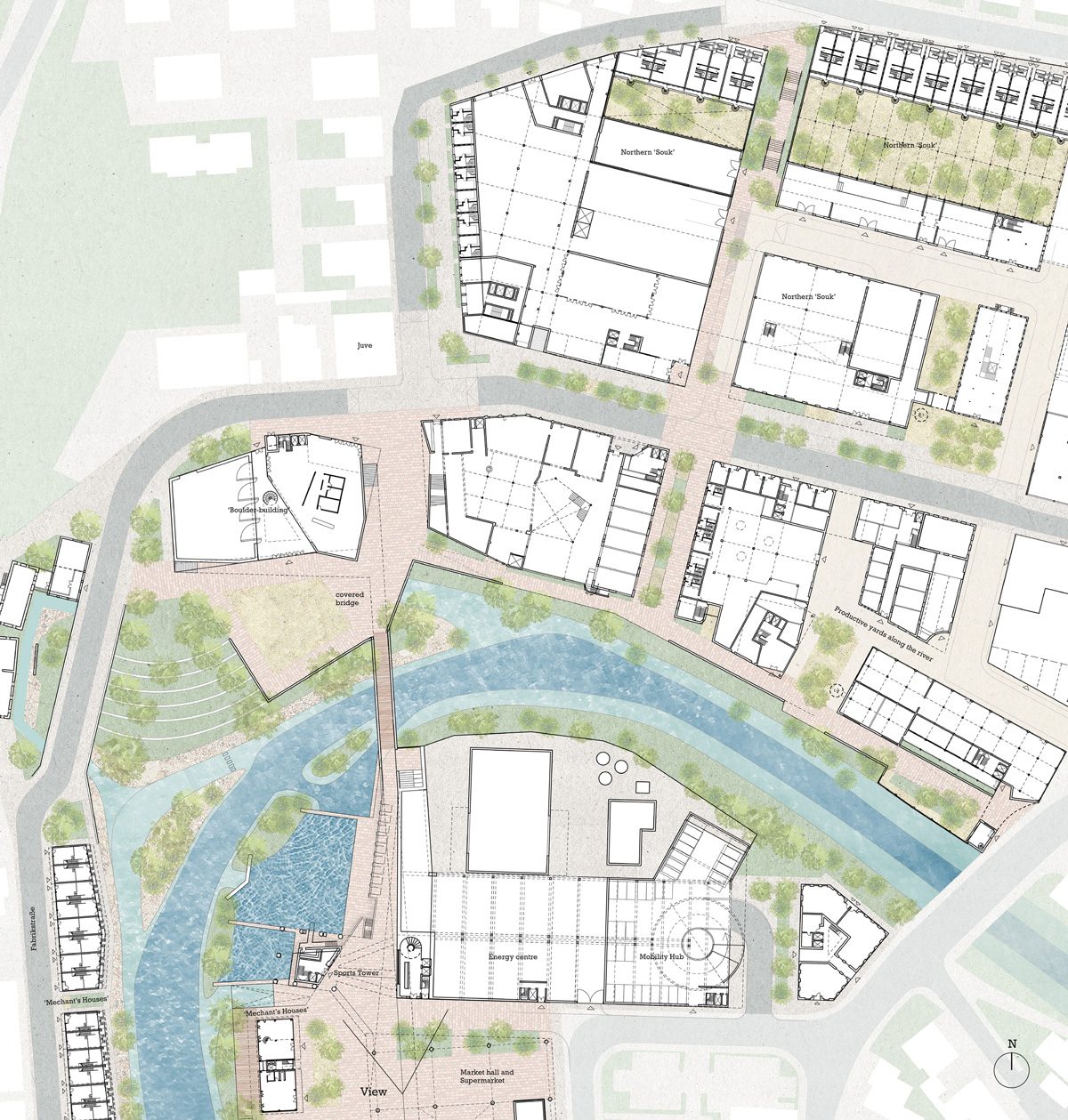 The trajectory towards net zero carbon embraces the concept of a passive to active approach, where the first and most important step is reducing the buildings energy demand, implementing passivhaus design principles. It then looks at the generation and storage of energy on site through an harmonic balance between the sources available on site. Wind, water and sun are harvested to provide the site with the required energy. The production of energy will play a key role in minimising carbon emissions and achieving a ‘Zero Carbon Backnang Community’. we propose to introduce an energy network which will allow the transfer and exchange of energy between clusters (self sufficient microorganisms) using a neutral temperature district energy network. By transferring energy between clusters we aim to achieve a self-balanced energy network utilising energy generation as a top-up mechanism. The energy generation could vary depending on the season and it could be a variation between:

- supplemented by hydropower from the river on spring and

Photovoltaics will be installed across the site to meet the electrical demand and progressively could be used to supply with electricity the transport network of the future. Greywater and rainwater will be harvested and treated for reuse within each cluster for irrigation and toilet flushing. A central facility will provide waste water treatment for the site. Along with their environmental benefit, balconies and winter gardens provide a great opportunity for food production at the domestic scale.

WINTER: The Productive City – ‘Jumpcut’ View from a living room in the northern ‘Souk’ to the south 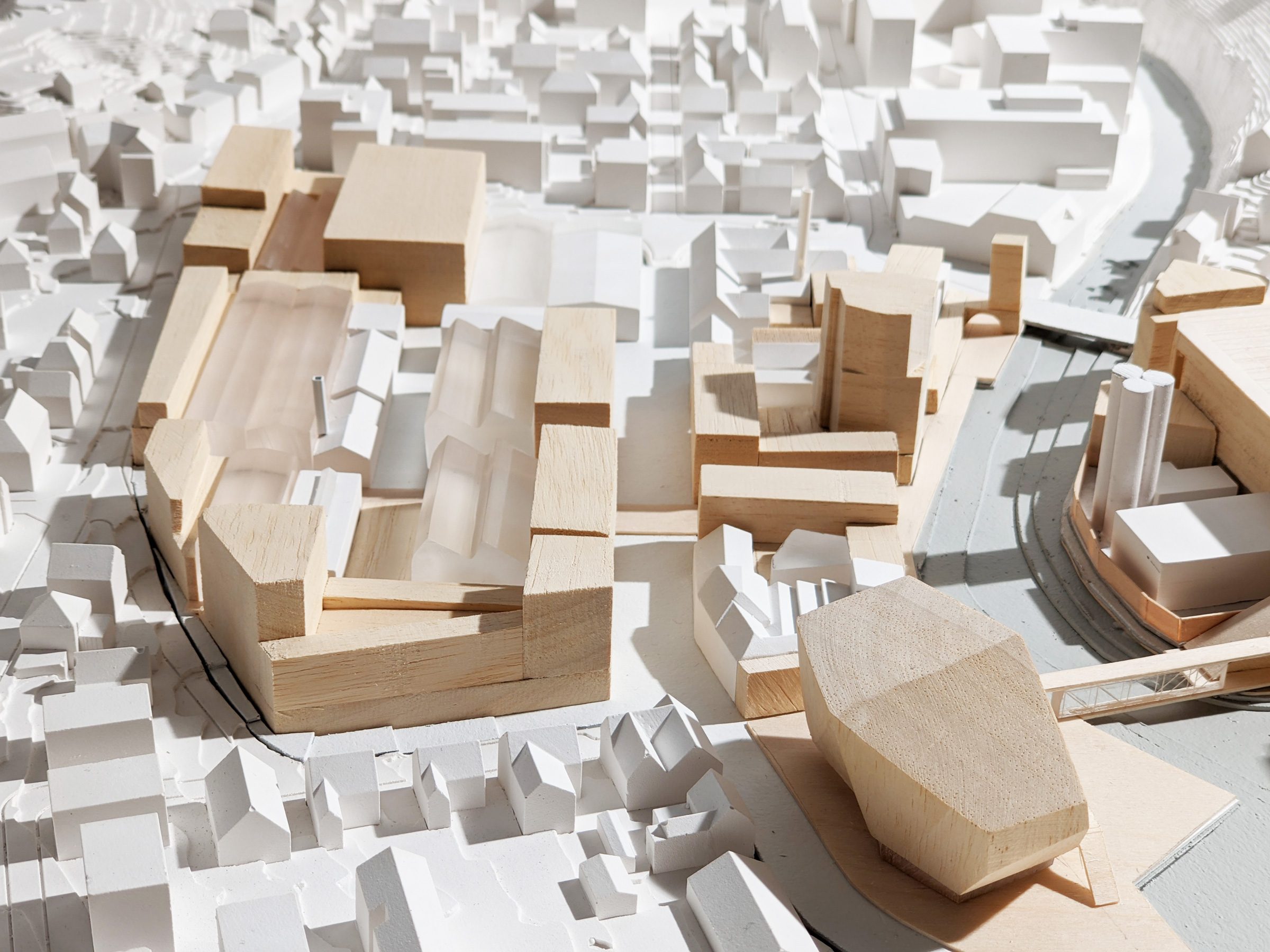 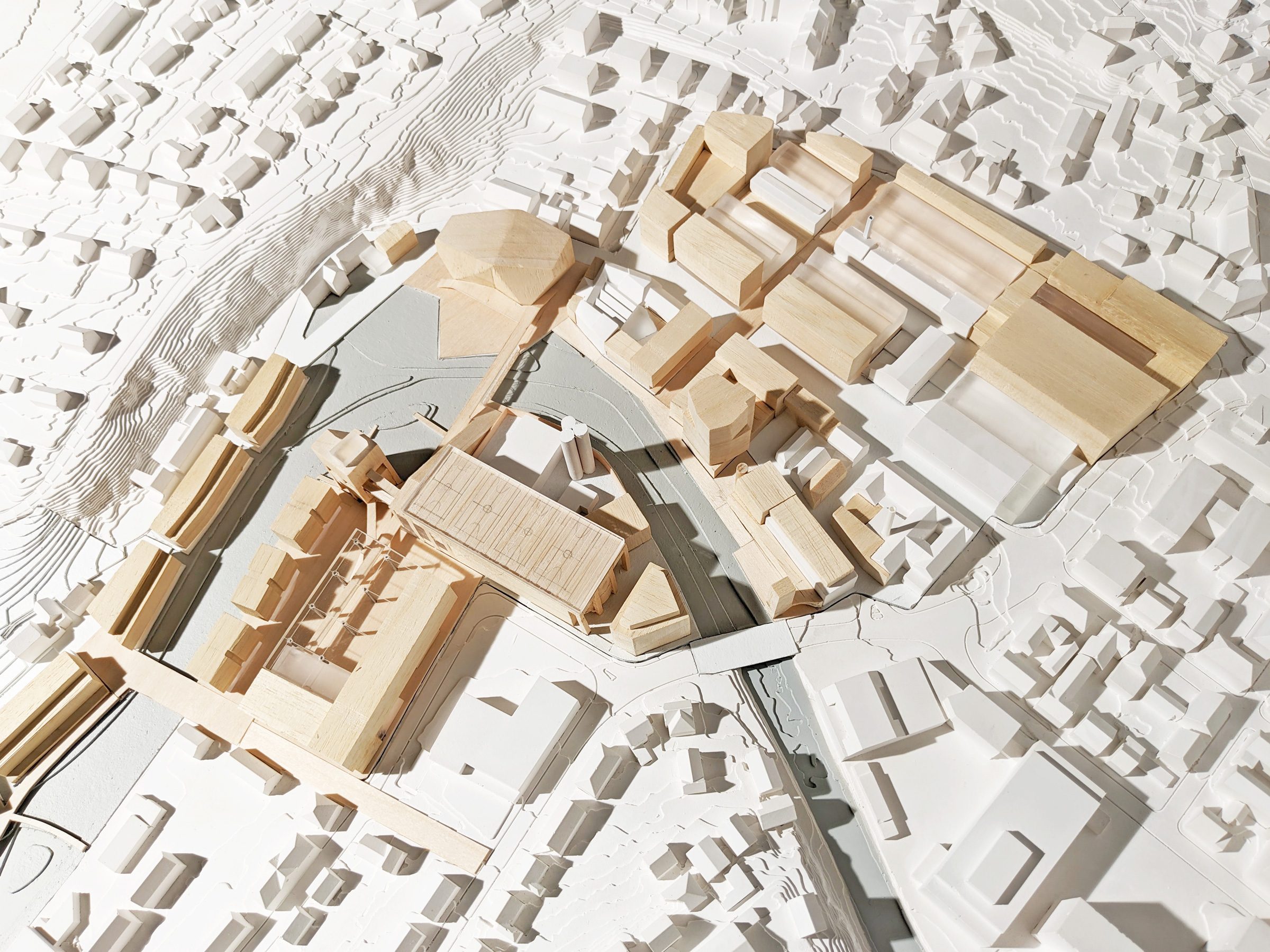 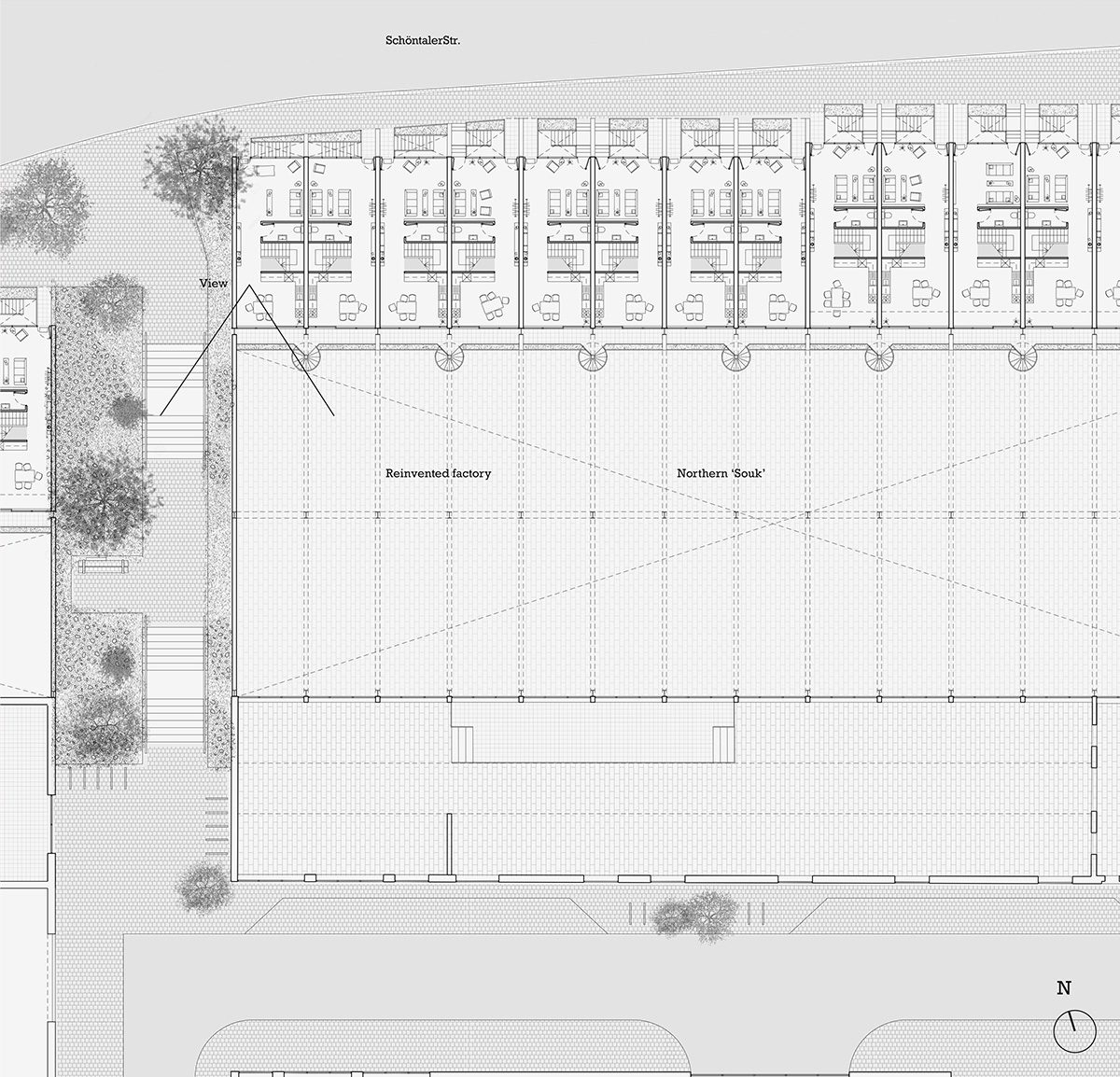 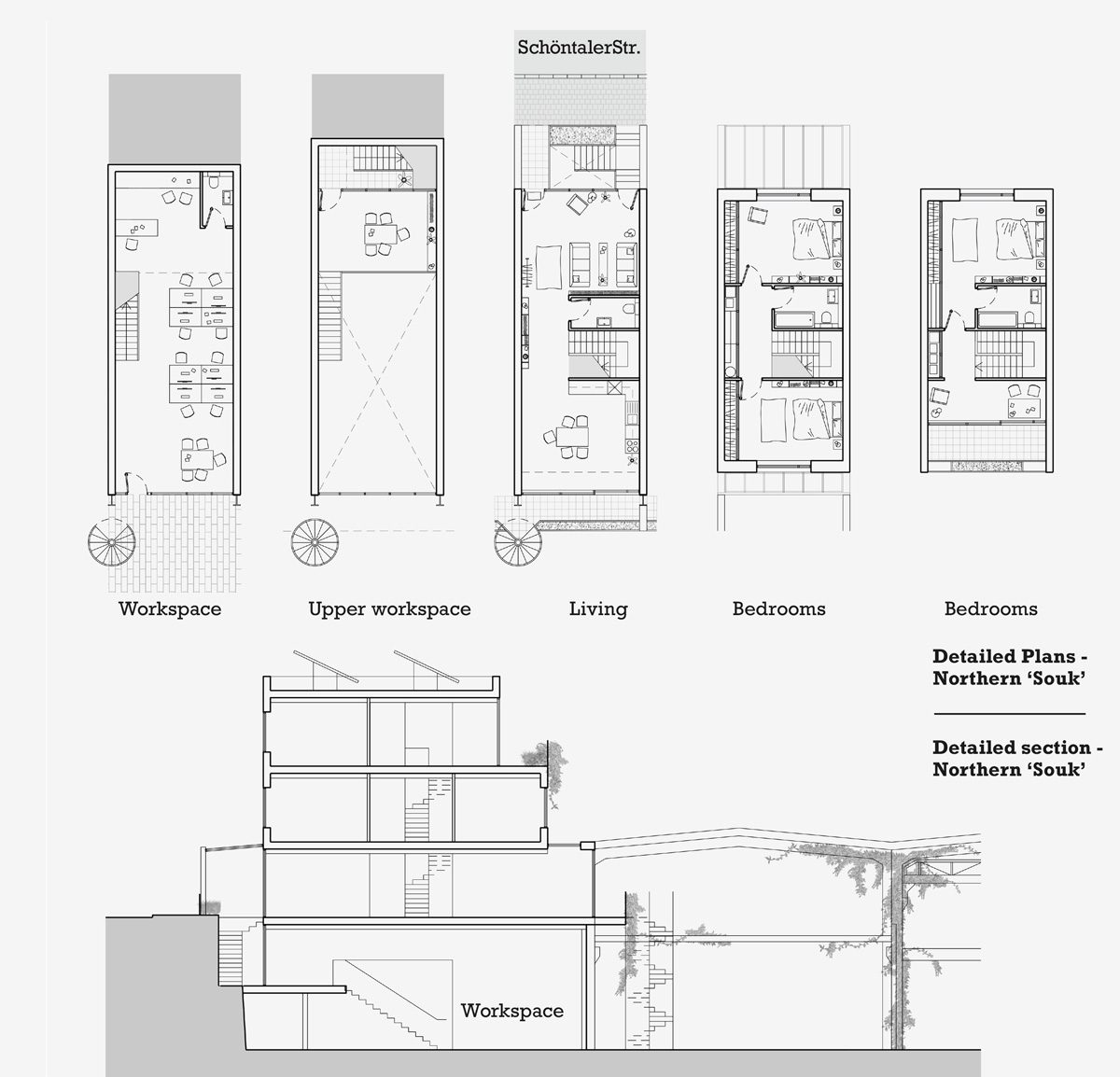 The two ‘Souks’ are both retrofitted existing structures and the former density of the factory sites at Wilhelmstrasse and Fabrikstrasse to propose a compressed urban mix of living and working.

In the ‘souks’ we imagine more hybridised future modes of working — a ‘usine-á-habiter’— bringing into greater intimacy private domestic space and shared productive space. Critical mass is achieved through compressing new live/work spaces against retained and augmented industrial buildings and using the former intensity of the factories on the site. In the view above one can see this ‘jump-cut’ relationship.

The upper parts of the construction use precision timber frames, (including glulam and CLT) with prefabricated rammed earth infill). Deep facades and shutter allow solar shading, winter gardens for passive heating and the incorporation of lush nature and food production through balcony and roof planting.

The first works are restoring the river and forming the social core of the new quarter.

New connectivity will be established with three new bridges, connections to the train station and hiking and biking trails along the Murr into the city center and out into the ‘Backnanger Bucht’. The two mobility hubs are designed to free the site from its use as open car parks. The southern hub also houses the energy center, from which a site-wide network will be built.

A high-quality prefabrication factory is being set up on site to expand the new build; existing buildings that are to be preserved are being stabilised and repaired, while minor demolitions are being carried out, with arising materials being saved for reuse. A new “merchant’s house” is being built along the river, together with living and maker rooms around the courtyards on the north side of the Murr. The market reinvents the supermarket area and forms a sociable space in the heart of Backnang West.

During this phase, new buildings will be constructed around the western “souk” and along the riverbank, including the “boulder” as a common cultural resource.

The main focus of repairs and intensification is on the former Kaelble factory premises. In addition to the existing buildings, new buildings are erected here.

The northern “souk” will be completed together with the apartment block in the far west of the site.

The mobility hubs are currently being adjusted as car usage decreases due to a larger resident population and better public and active transport. 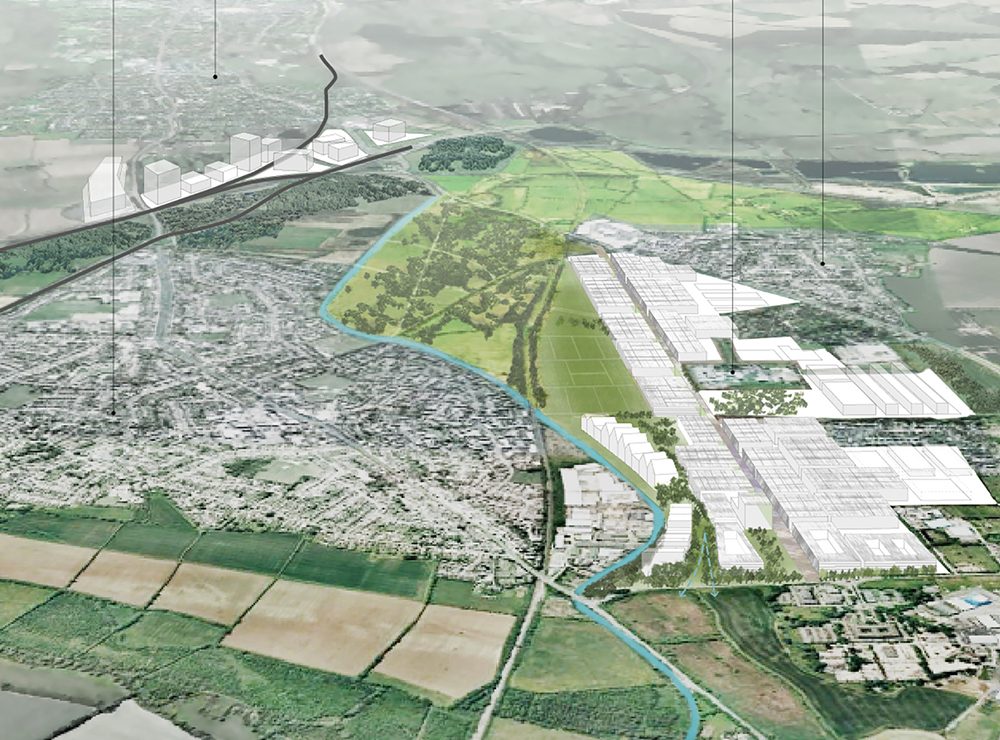 Study for the National Infrastructure Commission, making recommendations on the built environment of the Oxford-Milton Keynes-Cambridge Corridor. 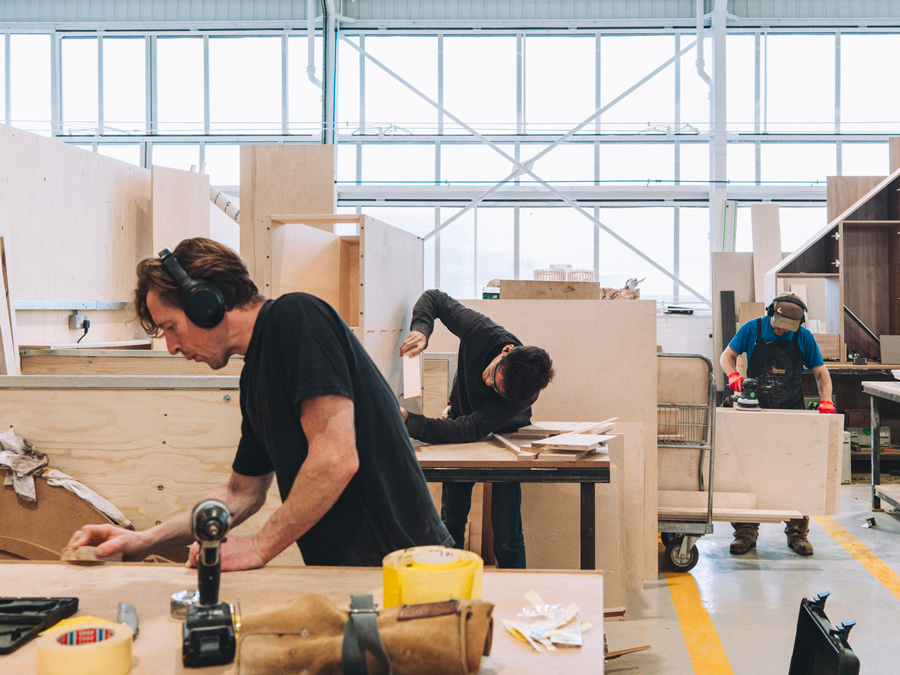